We break out the camera a little less on weekends, but we still got a few shots.

April 9th was the RPG meetup. Deleria, AD&D, and a D&D 4e kids game were offered–and I got to enjoy playing Deleria. As the RPGs wound down, board and card games filled the gap, with Fighting Formations, Firestorm Armada, Legend of the Five Rings, and Agricola coming out. A few students got to hear Chris explain how to make realistic looking flesh tones for minis. 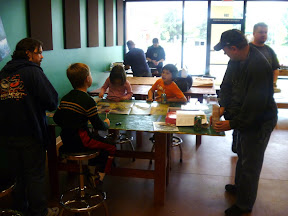 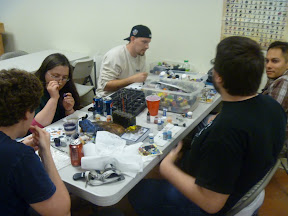 RPG Meetup photos are behind that link.

April 16th featured D&D for Kids as normal, but we also got to host the SoCal Freebootaz! Their beautiful minis fought across battlefields all afternoon. 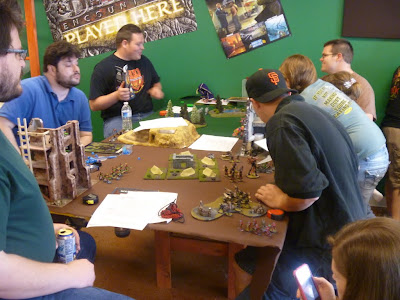 For other pictures of the day, follow the link.

We didn’t get pictures of the board game meetup on the 23rd, but we had a lot of fun. Jennifer led people through the Game of Thrones LCG, I led Ingenious and Jump Gate, and other good games ran through the day. Jordan showed up to help us get Magic cards in order.

We got to share Easter at the store with several people–and remembered to take a photo or two. Joe and Kelly were playing A Game of Thrones when we arrived. Jennifer selected her Game of Thrones house and began building decks for them. We also saw some low key Magic–including a father and son who had gotten Magic for Easter and decided to try it out with some experienced hands available. D&D chugged along throughout the day too.